From ATHENA collaboration
Jump to navigation Jump to search 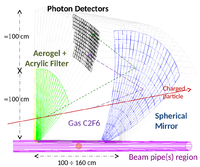 The dRICH generic configuration consists of 6, identical, open sectors; each sector has two radiators (aerogel and gas) sharing the same outward focusing mirror and instrumented area made of highly segmented photosensors (3x3 mm 2 pixels). The photosensors tiles are arranged on a curved surface in a way that minimizes aberrations. The dRICH original design and baseline performance have been studied through various means: a full Geant4 simulation (including an event based particle reconstruction processor), learning algorithms (e.g., AI-based) with Bayesian optimization to maximize the hadron separation, analytic parameterizations taking into account the optical properties of each component or the Geant4 simulated resolutions.

The dRICH focusing system is designed to keep the detector outside the EIC spectrometer acceptance, in a volume with reduced requests in terms of material budget, magnetic field strength, and radiation levels. This feature makes dRICH a natural candidate for the use of SiPMs with an integrated cooling system.

The JLEIC design has been optimized by AI [1]. The first figure shows the envelope dimensions (units=cm) of the fun4all implementation, which has been ported directly from the JLEIC design. The detector components are also visible.

The second figure shows the fun4all schematic re-scaled to fit within the ATHENA constraints (third figure). The scale factor is also given in the figure. The fourth figure shows the dRICh geometry implemented in DD4hep, which is integrated into ATHENA full simulations.

The figure shows an exaggeration of the walls (not to scale) with much larger thickness, in order to show the geometry in more detail, with the window thickness smaller than the wall thickness. The grey region is aluminum and the red region is gas. In reality the walls can be very thin (~0.5 cm).

For each sector, the aerogel is modeled as a cylinder with azimuthal limits and a defined thickness. It is placed such that it is in contact with the front of the vessel, and backed by a thin filter.

The spherical mirrors are defined by a fixed radius, centered on a fixed z-plane by centerz for each sector. The value centerx specifies the x-position of the sphere center, for the +x-axis sector. Azimuthal rotation propagates placement to other sectors. Only a subset of the sphere is drawn, using phi limits given by sector limits, and theta limits calculated with the help of the angles shown in the figure.

The sensors are tiled on a sphere, which has about half the radius of the spherical mirror, and roughly the same center. Note that optics improvements can still be made. The sensors are placed similarly to tiles on a disco ball. The figure describes the algorithm. This generalized placement will facilitate optimization studies.

The optics have been tuned such that the acceptance is maximized, while keeping the resolution as close to the optimized JLEIC design as possible. Notes for the tuning procedure are found at [5], wherein the numbers may not be up-to-date with the current version of the code, but likely are close.