Pseudo-data have been generated with the MILOU code, set to the GPD­‐based FMS code with NLO evolution. The |t|‐shape of the cross section has been generated as an exponential exp(‐b|t|), with b=5.5

In this study we assumed a direct measurement of the scattered proton using a Roman Pots (RP) spectrometer consisting of four pots per each station covering the whole solid angle around the beam pipe. The design is thought to maximize the acceptance, which in this beam-­energy configuration will be of the order of 70% being mostly limited by the beam-­pipe region (3σ from the beam) and by the quadruple aperture for the lower beam-energy configurations, see also [1].

The |t|-binning has been chosen as at least 3 times the RP experimental |t|-resolution which is expected in the order of 5% . The simulated luminosity is 10 pb-1 (5x100 GeV2) and 100 pb-1 (20x250 GeV2), both corresponding to ~1 year of data taking assuming 50% operational efficiency. Thus the differential cross-section has been extracted from the pseudo-data generated assuming un-polarized beams, the kinematic valiables have been smeared according to the expected resolutions to mimic the detector response. A systematic contribution of 5% to the unceertainties has been assumed. From those data, the γ*-p cross-section has been calculated using the “Hand convention”. The γ*-p cross-section has been then used for GPDs fits.

The differential γ*-p cross-section as a function of |t| for different Q2,x -bins is shown below compared with theory predictions:

The Beam-Charge asymmetry has been also simulated, in bins of Q2 and x, as a function of the azimuthal angle between the production and the scattering planes. 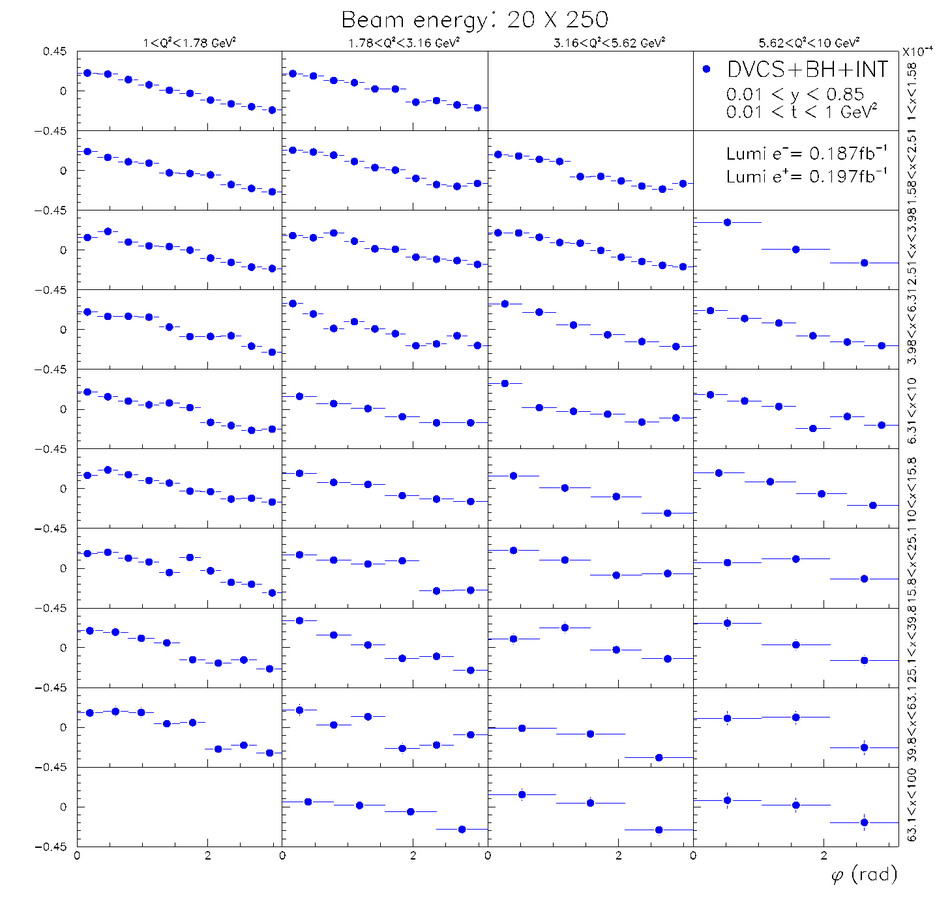 Since the MILOU code does not contain a simulation for transverse beam-helicity polarisation, to show the impact of an EIC the measurement of the transverse-spin target asymmetry (AUT),we simulated the event distributions as a function of ϕ considering 80% polarization and half statistics for each spin configuration. This led to zero values measurement (since AUT is missing in the code) but with realistic statistical uncertainties. The values of the uncertainties have been then compared to Dieter Mueller’s theoretical predictions for AUT. It shows the discriminatory power of eRHIC.

Using all the eRHIC pseudo-data on |t|-differential cross section and asymmetries, together the presently available experimental data, in a global fit, the GPDs function have been extracted and Fourier-transformed to obtain the partonic imaging in the impact parameter space: