High-precisision measurements at an EIC will require a sufficiently large beam luminosity.
This page contains information concerning the achievable luminosity of eRHIC based on the collider design as described in the EIC White-Paper.

The eRHIC design has an electron beam with energies ranging from 5 to 20 GeV (and 30GeV) with longitudinal polarisation of ~80%.
The hadron beam energy can be varied and has it maximum at 250 GeV for protons, giving a maximum centre of mass energy of 141 GeV (173 GeV).
It is planned to also have polarized He-3 beams (Emax=166 GeV).
The proton and He-3 beams can have at all energies either longitudinal and transverse polarization.
Maximum beam energy for gold nuclei is 100 GeV/A. RHIC can run a huge variety of nuclei from D, over Si, Cu to Au
Protons as well as nuclei beams can be run at lower energies as 250 / 100 GeV/c/A, the luminosity scales for the lower energies as described in the figure/table below.
The eRHIC design assumes CeC (Litvinenko and Derbenev, 2009) and crab cavities to be implemented.

The staging of eRHIC is done through the length of the linac of the machine, if more money is available the linacs will be extended and the lepton energy increases.
All other machine elements will be there from the beginning. The lowest lepton beam energy is 5 GeV. For all stages of eRHIC the first machine elements are at 4.5m from the IP. 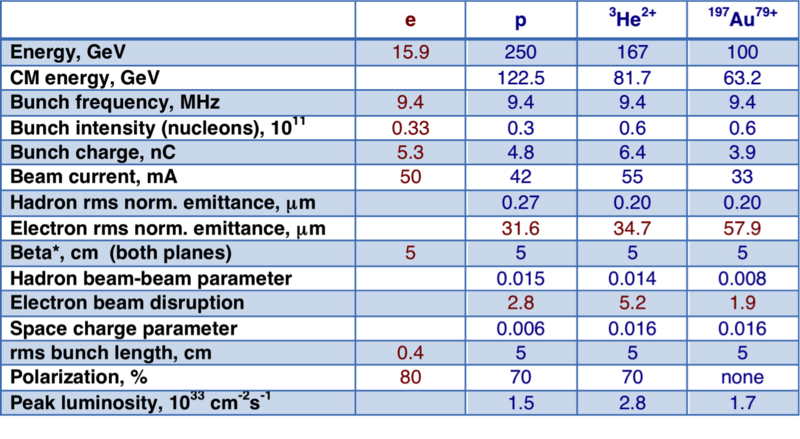 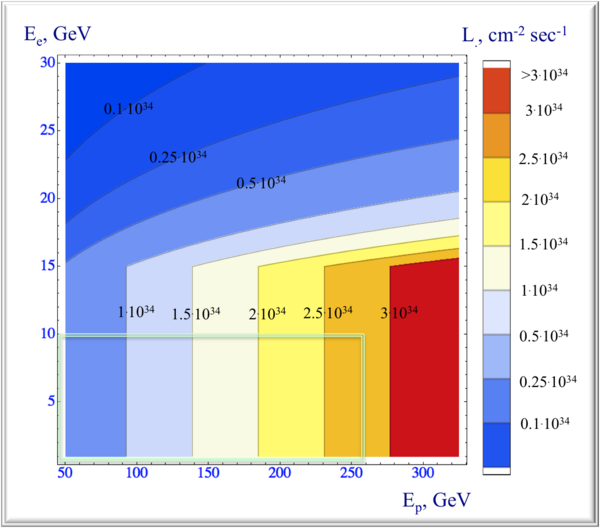 eRHIC luminosity for one IR:

To realize an EIC on a faster time scale implications of a machine with reduced risk/cost have been studied. The changes to the above design are operating the hadron beam with a bunch current equal to the current RHIC. This would reduce the requirements on the coherent electron cooling. The luminosity of such an eRHIC machine would be a factor of 10 lower, but all other features of the machine as described above would be conserved. To reduce risk/cost further an IR design was studied, which would use a dipole (0.3 Tesla) integrated in the experimental solenoidal magnet to separate the beams. This IR design would give the same luminosity as the IR design described in the EIC White Paper but without the need of crab cavities. The resulting luminosities are described in the table below.