From RHIC Spin Group
Jump to navigationJump to search

The purpose of the BNL Cold QCD Group is to provide leadership and support for the cold QCD program at RHIC and the future EIC facility at BNL. The goal of the cold QCD program is to understand the spin structure of the proton, to explore the multidimensional landscape in coordinate and momentum space of nucleons and nuclei, and to study the regime of high-parton densities and gluon saturation (CGC). The group also addresses common requirements of polarized measurements (particularly proton polarimetry). 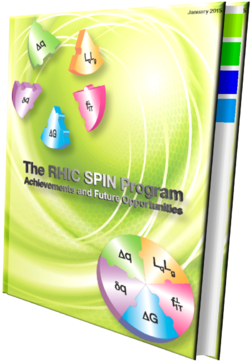 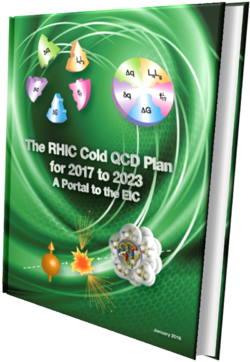 The Cold QCD Group is involved in the (s)PHENIX and STAR experiments, the CNI polarimeter group, and the EIC project at BNL.

The CNI polarimetry group develops, maintains and operates polarimeters in the Relativistic Heavy Ion Collider (RHIC) complex. These include the CNI polarimeter in AGS and the p-Carbon and polarized H-jet polarimeters in RHIC. The group provides the final beam polarization values which are essential input for any analysis of polarized data in the STAR and (s)PHENIX experiments.

Members of the group are involved in a number of measurements in high energy polarized and unpolarized proton-proton and proton-ion collisions in the STAR, PHENIX and future sPHENIX experiments. The documents below contain information about the status and near term plans for the Cold QCD program at RHIC to which the group has and continues to contribute:

Members of the BNL Cold QCD group collaborate with physicists around the world to realize a powerful new facility in the United States with the aim of studying gluons, particles which bind all the observable matter in the world around us. This new facility, known as the Electron-Ion Collider (EIC), would collide intense beams of spin-polarized electrons with intense beams of both polarized nucleons and unpolarized nuclei from deuterium to uranium. Large, new detectors are being designed to detect the high-energy scattered particles as well as the low-energy debris as a means to develop a deep and profound knowledge of the structure and dynamics of matter.